In celebration of the International Day of Rural Women tomorrow, we honor Alma Bayawan and her dedication to empowering her community towards resilience by promoting sustainable livelihoods.

“As a leader of our Community Savings Group, I will share with my members the importance of planting more types of crops and use practical ways to increase our crop production and would increase income and most especially we will ensure that our families have food to eat,” – Alma Bayawan, Uswag CSG Leader

Alma is the incumbent leader of the Uswag CSG in Barangay Illomavis, Kidapawan City. On September 9, 2021, she represented her community as she participated in the Food Systems Independent Dialogue, ‘Building Resilient Local Food Systems by 2030’ which was last spearheaded online by the International Institute of Rural Reconstruction (IIRR). “I learned that I should not rely on a single variety of crop to be planted in the field, it is better also to plant other types of crops that will suit the climate of our place and could resist in drought or frequent rains such as cassava or sweet potato. Aside from increasing our income, we would also have additional sources of food for our families.”

The main objective of the activity is to solicit concrete actionable commitments from various stakeholders. These will be their contribution to the quest in ensuring safe and nutritious food for all, which is also in support of the United Nations Food Systems Summit 2021. © Photo by Roger Cabiles for Action Against Hunger

“I have learned a lot from my participation in the virtual dialogue, I met other participants in other places who are also farmers like me and continued to grow crops to earn an income and have food for the family,”

Like Alma, we recognize the work of rural women ─ they are real-life heroines in the world’s food systems. “Uswag” means ‘develop’ and agreeably, rural women’s significant contributions to nutrition, food security, and climate resilience put their communities on the right path towards sustainable development. © Photo by Louie Bullanday for Action Against Hunger

The Food Systems Independent Dialogue was convened by IIRR in partnership with the Philippine Coalition of Advocates for Nutrition Security, Inc. (PhiLCAN), Philippine Society of Nutritionist-Dietitians, Inc. (PSND), PROLINNOVA Philippines Country Platform (PROLINNOVA), and Scaling Up Nutrition-Civil Society Alliance Philippines (SUN-CSA PH). Action Against Hunger is a member of PhiLCAN. KIDAPAWAN CITY — Action Against Hunger, under the MOVE UP 4 Project, served as one of the evaluators for the community landslide simulation drill in Sitio Embasi last September 16, 2021. The drill was facilitated by the local government of Barangay Perez, Kidapawan City in accordance with the 3rd Quarter Nationwide Earthquake Simulation Drill.

Aside from the Action Against Hunger’s MOVE UP team, representatives from the Philippine Red Cross, Armed Forces of the Philippines, Philippine National Police, and the City Disaster Risk Reduction and Management Office (CDRRMO) & City Social Welfare and Development Office (CSWDO) of Kidapawan evaluated the said simulation activity.

Sitio Embasi is one of the highly hazard-prone areas in Barangay Perez because of its steep location. The remote community was heavily affected during the landslide caused by the October 2019 Mindanao Earthquakes. This negatively impacted as many as 90 families who have been displaced since. To date, many of these families are still residing in evacuation centers since the relocation site organized by the Kidapawan City governments is yet to be completed.

The simulation drill began at exactly 9:10 a.m., kicking off with the community alarm siren and signaling the evacuation of about 30 families living in the area.
During the simulation, the barangay local government unit (BLGU) responded promptly to the ‘landslide victims’ who had fled their homes.
A triage and first aid station for casualties were also established. Meanwhile, the barangay social workers assisted in the evacuation of the families and then facilitated the distribution of food relief who were relocated to Datu Igwas Integrated IP School. Similar to actual emergency situations, the said school was turned into an evacuation center during the drill. 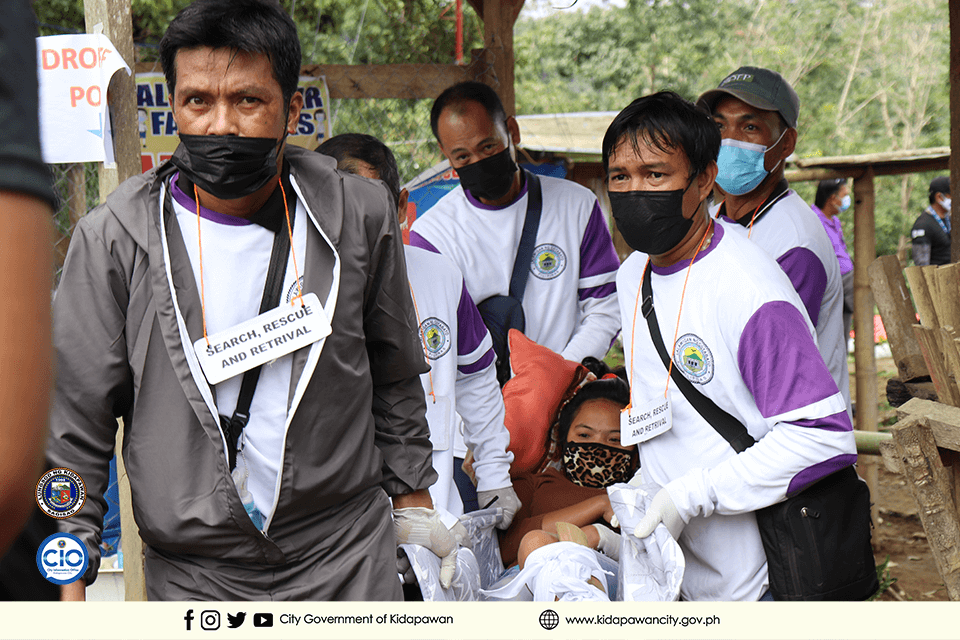 One of the potential challenges raised during the activity was the evacuation of families with COVID-19 exposure—those who are undergoing isolation or quarantine. This is where members of the City Epidemiology and Surveillance Unit (CESU) were called in to assist in the evacuation. Their main role is to ensure that suspected, probable, and confirmed COVID patients will not infect others should an evacuation take place. 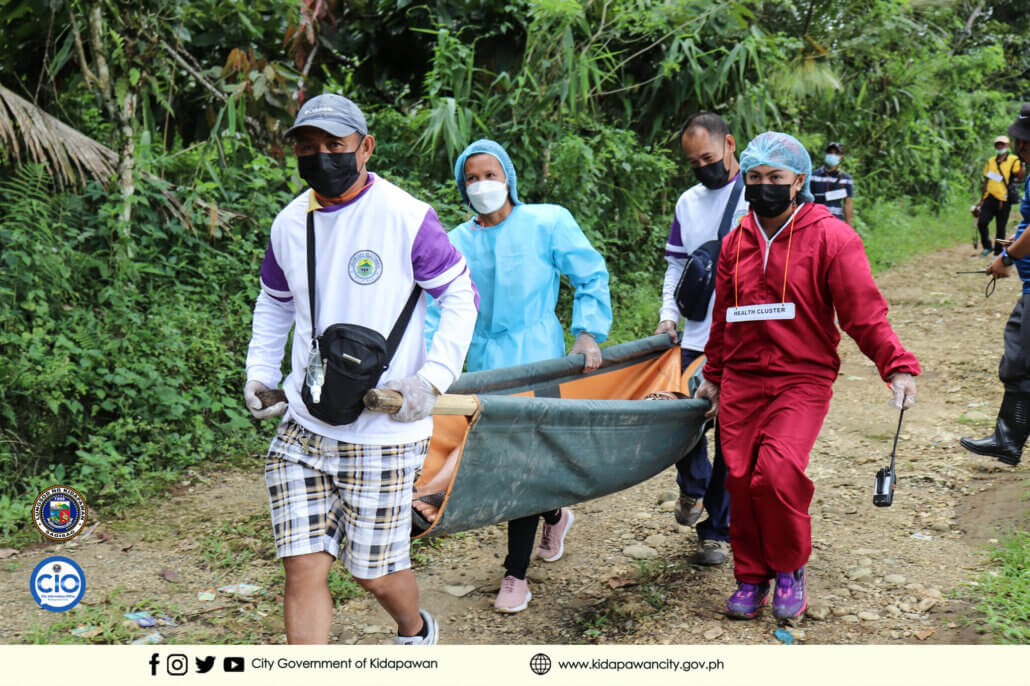 The roles of MOVE UP and other evaluators at the scene were to measure and determine the community’s preparedness in the event of a landslide in their area. As a result, any gaps or areas for improvement noted from the activity were expected to be addressed in the barangay’s evacuation plans.