The host communities where the evacuees stayed were caught unprepared with the massive influx of people. Food, health, water, sanitation and other basic services for the displaced population were severely compromised. Action Against Hunger personnel were on the ground two days after the conflict started to assess the situation and determine the urgent humanitarian needs of the affected population. Emergency Response projects in Food & Nutrition, Water, Sanitation & Hygiene (WASH), Food Security and Livelihoods, and Shelter started on June 1, 2017 and continues to this day.

Built in 1965 for the education of children of farming families from the remote areas of Pantao Ragat, the Aloon Elementary School’s problems on water, sanitation and hygiene were as old as the school.

Norphia M. Ombawa, 33, was a student from the school and now teaches there.  She observed that her pupils are experiencing the same situation she had as an elementary student before. There were no water facilities in the campus because the water tank for rainwater storage was already rotting in rust with age.  They were using plastic containers to catch water when it rains. During the dry season, they had to fetch water from a spring which was a distance from their school.

“Our toilet which was made of wood collapsed a few years back so we didn’t have one to use. Our pupils would go under the trees at the back of the school to urinate and sometimes, to defecate”, she said.

With the line of trees just a few meters from their classroom, sometimes the smell of feces would go through their windows and distract their classes. Some of her pupils would also smell bad throughout the day because of being improperly washed. She worried that their exposure to germs would get them sick.

The local government responded to the water concern by connecting the school’s pipes to the water storage facility in the Mosque across the street.  But, the lack of a toilet for the students to use was still a problem and open defecation continued.

This situation became more difficult when several families displaced due to the Marawi Conflict took refuge in their village on May 2017. The number of pupils spiked up with children from the displaced population enrolling at the school.  They went back to having less water, if none at all because the Mosque’s water tank was also shared with the refugees.

So when the Action Against Hunger tracked the displacement of children in the village, they also heard the concerns of the teachers on the school’s lack of toilet and their own water access facilities.

Action Against Hunger’s mobile team was already working in the area answering the needs of the displaced population and got word of the school’s concern. With the funding from the United Nations Children’s Fund and the United Nations Central Emergency Response Fund, the organization built a tap stand for handwashing, tooth brushing and drinking water. A two-door concrete toilet was also constructed within the school grounds.

Action Against Hunger personnel held a series of hygiene promotion sessions to the students, teaching them the importance of proper sanitation & hygiene to avoid the spread of diseases.  These sessions also trained them on the proper way to hand wash and brush their teeth. After these sessions, each student was given a hygiene kit that contained soap, shampoo, toothbrush, toothpaste and towels that they could use every day in school and at home.

Norphia integrated the messages and techniques from these sessions in her classes and continues to remind them about the importance of being clean and keeping the surroundings clean as well.

“They became conscious on their hygiene and the cleanliness of the school. Their parents also told me that they brought this practice at home”, she shared.  ● 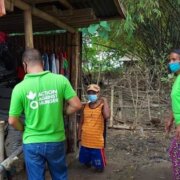 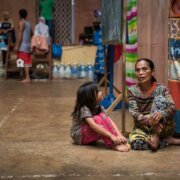 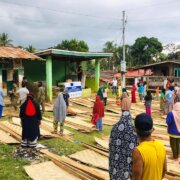 STORIES FROM THE FIELD: Breaking bias in times of emergencies
0 replies