The youth is the hope of the future, they say. In order to address the many issues impacting our fight against hunger, we must not only help children to grow up strong, but also engage and capacitate them to be the leaders they aspire to be.

We approached this by providing interventions focused on protection in the Immediate and Comprehensive Response for Communities Affected by Typhoon Rai in the Philippines project through the support of the European Civil Protection & Humanitarian Aid (ECHO).

23-year-old Mario Ferrano Jr. is the Sangguniang Kabataan (SK) Chairperson of Barangay Mandaug in the town of Calape, Bohol. As the village’s youth leader, Mario represented his community in the 4-day Child Protection Training of the ECHO-funded Typhoon Odette Emergency Response.

The workshops, which include topics on Child-Friendly Space and Mental Health and Psychological Support, were conducted by Action Against Hunger. Mario caught the attention of the project staff and training organizers because of his sense of initiative and participation.

According to the Municipal Social Welfare Officer of the Local Government of Guindulman in Bohol, local child abuse cases increased significantly during the pandemic but doubled during the aftermath of Supertyphoon Odette (internationally known as Typhoon Rai)

Action Against Hunger initiated various programs to promote and implement protection for children in the typhoon-devastated areas of Bohol. The programs include a series of training for social workers, barangay officials, and youth leaders and the building of child friendly spaces in coordination with local government units (LGU) and barangay councils. One of the participating LGUs is the town of Calape. The training was part of the Typhoon Odette Emergency Responses protection activities, such as: provision of psychosocial support services including access to child and youth-friendly spaces, recreational activities, and psychological first aid; prevention and response to gender-based violence (GBV); reactivate and strengthen community-based protection mechanisms to assess and monitor protection concerns; and implement community awareness and feedbacking activities.

“This project by Action Against Hunger and ECHO, the Child Friendly Space, is extremely relevant. One of the things that are taken for granted during calamities is the children, not only during typhoon Odette, but also during the 2013 earthquake. I also noticed that children were overlooked during the pandemic. I feel sorry for the children when they get ignored because their parents are busy lining up for relief goods or looking for money. The children are taken for granted to the point that they would look dirty, which is bad for their health.”

The team also found out that even before the project’s intervention, Mario was already an active community leader in their barangay initiating programs for the benefit of the youth. Mario volunteers as a facilitator during the Child-Friendly Space training

One of the things Mario is known for is the small youth organization he founded in the barangay—the Association of Spirited and Ardent Youth or ASAY. The name of the organization is derived from the local expression “Asay” which is a shortened version of “Asa ang…” or “Where is the…”. “Asay” is is normally used by the youth when they are asking for ‘news’ about celebrations in the neighborhood so they can go there, join the party, and eat: “Asay kaon” or “Where is the food.” This is how Mario and his team found inspiration in creating a youth community through food and celebrations. Whenever there is a celebration in the barangay such as a birthday dinner, Mario and the rest of the youth in the village would meet not only to enjoy food but also to exchange stories, ideas, and aspirations. The organization started with 19 members in 2019; now, they have more than 70 youth members. The primary target members of the organization are out-of-school youth or youth who were allegedly users of illegal drugs.

Presently, the youth members from the organizations who did not have the eagerness to go to school anymore finally enrolled in the most recently opened school year. Accordingly, none of them use illegal drugs anymore; the parents are at peace because their children come home earlier. They used to come home late because of their vices.

“It is nice to hear that you changed someone’s perspective in life. Instead of remaining a drug user, why not go to school?”

After hearing about the Typhoon Odette Emergency Response’s plans on protection activities, Mario got excited to participate in another volunteer opportunity for his youth community in Barangay Mandaug. As someone who has a passion for teaching and communicating, he is eager to put into action all the lessons on Children’s Protection that he gained from the series of training.

“I am thankful to Action Against Hunger for choosing our barangay as one of the beneficiaries. Indeed, we have many children who will benefit from the program, the Child Friendly Space. This is a great help to us, barangay officials, in providing service to our youth and encouraging them to participate in the program rather than get into vices….One thing I will never forget about Action Against Hunger is the lesson on giving value to children.”

Barangay Mandaug is one of the 19 barangays in Bohol that received training on Protection and funds for building a Child-Friendly Space in their respective communities. Aside from this, the residents in Mandaug also received Water, Sanitation and Hygiene Kits from Action Against Hunger as part of the Immediate and Comprehensive Response for Communities Affected by Typhoon Rai in the Philippines project. Mario listens to his co-participant reciting during the training

Mario was recently hired as a public high school teacher and will soon start his professional teaching journey. Knowing his dedication and passion for public service, youth development, and volunteerism, we are optimistic about the kind of educator he will be to the younger generation — young, bold, and caring. Hopefully, he will educate more youth to have the same dedication and passion as him. 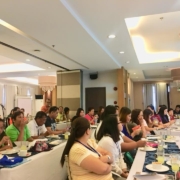 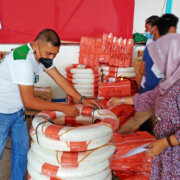 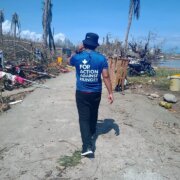